Mark Zuckerberg started 2018 by announcing major changes to Facebook’s platform in a bid to revamp the News Feed as we know it. With the aim of encouraging ‘more meaningful social interactions’ for users, the updated algorithm will prioritise content shared by friends and family above content from brands and publishers. From a user perspective, it is a beneficial move, as Facebook aims to reduce and prevent brands, articles and viral content taking over our newsfeeds. But what does this mean for companies that rely on website traffic from the platform?

According to Zuckerberg, the update is a move towards sharing personal stories online rather than something for businesses to take advantage of, meaning you’re in luck if you’re not a fan of the Unilads and LadBibles of this world. Companies may also have to spend significantly more on ads to reach the same portion of target audiences. There’s also been talk of an imminent ‘death of organic content and reach’ but others argue it’s the emotive, valuable and shareable element of high-quality organic posts that will prevail through the advocacy of our friends. Whilst many brands are still unsure of the impact this will have, it has been confirmed that active interactions such as sharing, commenting and reacting will hold the most value whilst ‘passive’ interactions such as clicking, viewing or hovering will provide the least impact. The update has been rolled out on Facebook only, so it’s safe to expect Instagram’s advertising capabilities will become a useful paid media sidekick, especially as the number of users on the platform reached 800 million at the end of 2017. It also means companies will need to seek more counsel on their social outputs and review their quality to maintain the valuable business return from engaged users.

It’s not the first time an update like this has impacted brands and their content outputs. Just over three years ago, the shift from organic to paid content saw the platform dubbed as ‘pay to play’ marketing for brands to utilise and target consumers. During this time, publishers had to re-consider advertising budgets and push more spend through Facebook to get noticed by audiences. It also gave political publishers a pathway to target their campaigns to audiences which led to big stories last year about fake news and election meddling. Facebook continues to come under heavy scrutiny about the role it plays within global political movements and the recent announcement is an attempt to tackle these issues.

Whilst engagement and time on the platform might decrease, the hope is the time users do spend on Facebook will become more “valuable”. However, Facebook has so far failed to delve deeper into the effects of our increased time on the platform and what it means for our mental health. On average, we spend around 50 minutes a day on Facebook, but for a lot of people, that could easily be much more. We all love to scroll through our feed to catch up on updates from friends or news sites, browse holiday photos, attend an event, speak to family members and post selfies with pets, which is exactly what Zuckerberg wants to see more of. But he is still yet to conquer the bigger issues around the impact of increased time on the channel.

The update was first tested in October 2017, but it’s now been officially announced that it will be rolled out slowly this year. Watch this space. 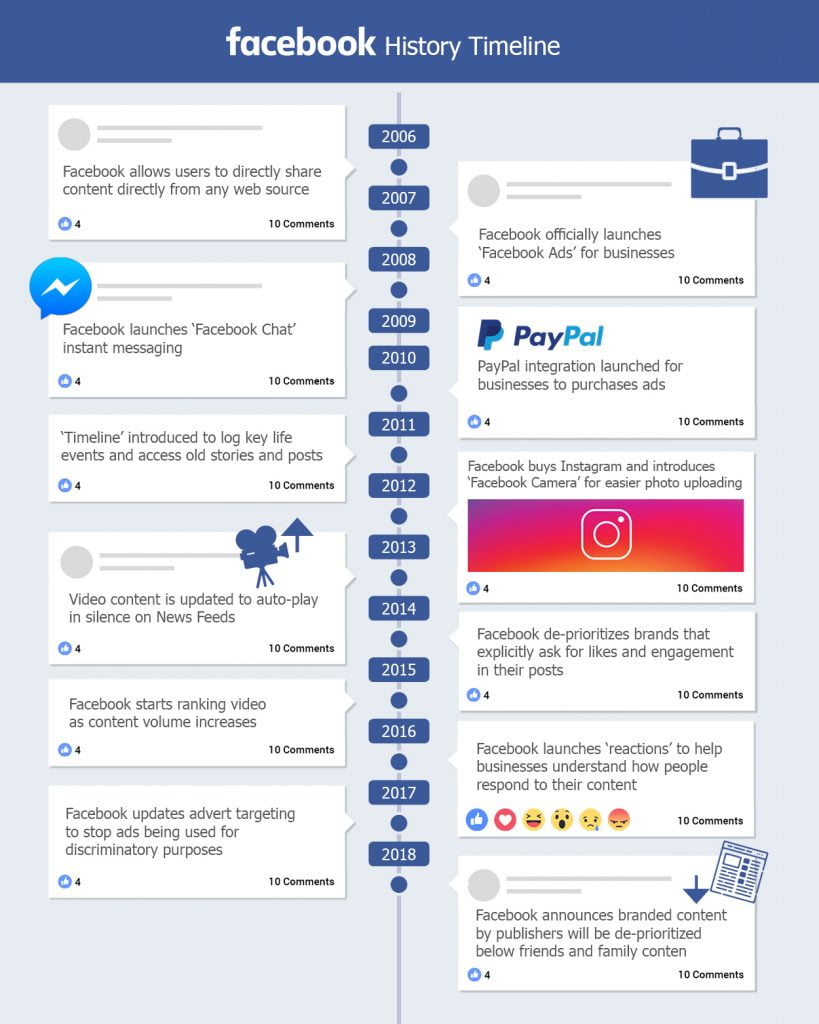