How brands tried to capture our hearts this Valentine’s Day

Love is patient, love is kind, love is a scratch-and-sniff card that smells like fried chicken? Apparently so.

There are a million and one ways to show your significant other that you love them this Valentine’s Day. We’ve rounded up some of the coolest, most innovative, and just plain strange ways that brands have helped the nation do that this year.

We’ve heard it time and time again, and it’s become even clearer that there is only one way to anyone’s heart – through their stomach. Some of the greatest foodie V-Day campaigns this year include Jolly Rancher’s sweetie jewellery (yes!), Deliveroo’s doughnut engagement rings (yes!), and entire bouquets made from fish and chips (double yes!). But my favourite has to be from the beloved pastry maker, Greggs. As part of a partnership with restaurant booking service, OpenTable, a selection of Greggs branches will be transformed into romantic, candlelit restaurants decked with roses, chandeliers, dimmed lighting, white tablecloths and even table service for the four-course meal. Because what better way to say ‘I care about you’ than with a steak bake on a REAL PLATE? 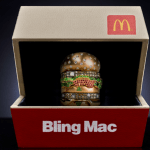 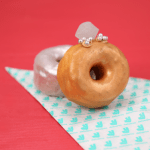 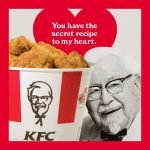 Another of our flavourful favourites this Valentine’s Day is the ‘Bling Mac’. When McDonald’s announced its Junior and Grand Macs earlier this year we thought we’d filled our quota of burger excitement—how wrong we were. In time for February 14th McDonald’s gave fans of the Mac the chance to win a burger shaped ring made out of gems, diamonds and sapphires, and worth a whopping £9,000 by tweeting in their love poems, quotes and declarations. Not dedicated to their loved ones and significant others, but to the Big Mac of course.

Brits were expected to spend an average of £22 on Valentine’s Day this year, and whilst it may seem like the days of a simple card and chocolate combo are long gone, a large portion of this million pound market’s profit is still spent on cards. There are the classics – think ‘Be my Valentine’- and some cynical versions, and more cutesy ones than we dare to count, but my pick of the card crop this year goes to the partnership between the NHS and Moonpig. Organ transplants are not usually brought up on the first date (or second, or third) so in order to get the conversation around to how important being an organ donor can be, the range of free cards aims to deliver the message in a fun way. The cards feature illustrations and messages such as ‘I only have eyes for you… unless they get donated to someone who needs them which is also cool’ and ‘My heart will go on…especially as I’m on the NHS organ donor register’.

Whether you’re married, in a relationship, or it’s bloody complicated, there are countless ways to spend Valentine’s Day with brands this year. Baileys has launched a new pink strawberries and cream flavour; Fortnum & Mason has created same-sex couple biscuits for ‘Adam and Steve’ and ‘Eve and Niamh’, and pretty much every supermarket that exists had great meal deals for a night in. And don’t panic if you spent V-Day alone this year, because let’s face it, who doesn’t fantasise about eating an entire doughnut bouquet themselves, thank you very much.